In Liverpool's game against Everton, Van Dijk and Thiago both had physical collisions with opposing players. According to a report by Liverpool reporter paul joyce, the two underwent a knee examination after the game. 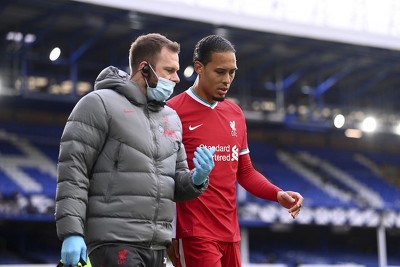 In the 6th minute of the game, Van Dijk was tackled by Pickford in an offense and was then replaced in the 11th minute because of his inability to persist in the game. Only 8 minutes later, Everton used a corner kick to equalize the score.

Before the end, Thiago was brought down by Risa Lisson's shovel in the center circle, who received a red card and was sent off. According to a report by Liverpool reporter paul joyce, both Van Dijk and Thiago had their knees examined after the game to confirm whether there was a risk of injury.